Food in China is drastically different from the Chinese food you’re likely to find in most Westernized Chinese restaurants. Traditional Chinese food is incredibly diverse, incorporating heady spices as well as clean flavors, wheat breads as well as rice-based dishes, dainty foods served to the aristocracy as well as simple but satisfying street fare. Many of the larger hotels catering to Western tourists will have restaurants serving Western foods, including traditional American and English breakfasts, steaks, and even burgers. In large cities like Beijing, you will also find restaurants specializing in other cuisines, including, Japanese, French, Italian, and other internationally popular ethnic food. Every region in the country serves its own traditional Chinese food with distinctive characteristics. In the northwest, Xinjiang cuisine has a large Muslim influence, and features wheat noodles, flatbreads, and cumin-flavored halal meats. In Tibetan regions, you will undoubtedly come across yak butter tea, and Himalayan food flavored with cumin and curry. 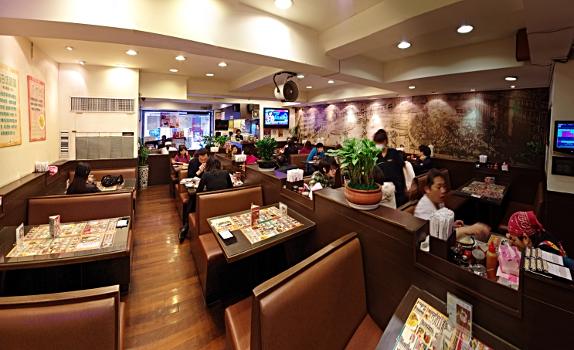 China is a great country in which to explore the local culinary traditions, so be sure to ask about the local specialties. For example, in the mountains, restaurants typically serve “mountain food” cooked with local ingredients such as mushrooms, bamboo shoots, and more. In Guilin, among the splendid karst peaks of the Li River, you’ll be treated to whole fried fish. In Hangzhou, you might order a stir-fry flavored with Dragon Well green tea. Restaurants vary from the hole-in-the-wall noodle places to full-service banquet halls where you will be served with gold chopsticks. Typically, throughout China, a tip is not expected. Universally, you can call for the bill by saying “mai dan." Many lower-end local restaurants do not have English menus, so come prepared! 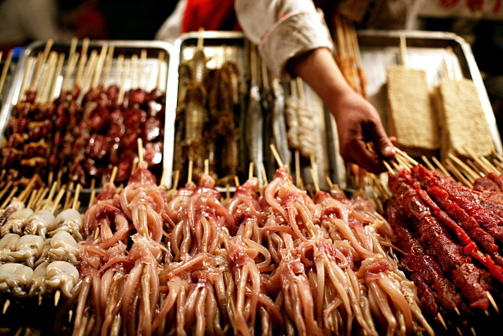 China has an incredible array of delicious street food, and as you explore any given city, you’re sure to see street carts selling meats on a stick and local sweets and snacks. In Shanghai, pick up a barbecued octopus tentacle or a delicious “rou jia mo,” a wheat bun filled with cumin-spiced meat reminiscent of Turkish doner kebab. In Hangzhou, buy local sweets made of spun sugar and sticky rice. In Macau, sample the Portuguese egg tarts served at every corner. In Beijing, head to Wangfujing Street, a street food paradise, where you can get everything from spicy noodles to fried scorpions.

As you travel through China, be on the lookout for these distinctive specialties:

1000 year-old egg: These preserved eggs are an unappetizing shade of black, brown and green, but they’re surprisingly tasty served in a steaming bowl of congee or chilled and chopped over silky cold tofu.

Bird’s nest soup: This sweet delicacy is made from the nest of the cave swift, which builds its nest using its own saliva. Bird’s nest soup is said to be excellent for your health and for promoting clear skin.

Shark fin soup: Be aware that shark fins are often harvested unethically and that eating shark fin soup contributes to the mistreatment and endangerment of shark species worldwide. Regardless, it is a status symbol, so if you are invited to a banquet, chances are you’ll have a bowl in front of you.

Rice dumplings: Wrapped in leaves and boiled or steamed, these sticky rice dumplings (known as “zongzi”) are a delicious treat. They come in both savory flavors (with yellow beans and fatty pork) and sweet.

Moon cakes: Around the time of the mid-Autumn festival, you’ll see these hockey puck-sized cakes all over China. Traditionally, they are filled with lotus paste mixed with lard, and a salted duck’s egg yolk, but newer versions come in a variety of flavors from mango to green tea.

Stinky tofu: It’s an acquired taste, but aficionados of stinky tofu claim that a nicely pungent, aged piece of tofu is akin to a finely aged blue cheese.